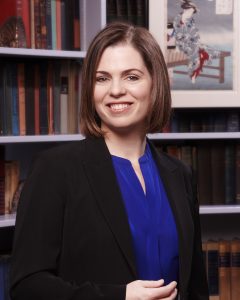 Sarah Kovner is a Senior Research Scholar at the Arnold A. Saltzman Institute of War and Peace Studies at Columbia University. She has been a Fellow in International Security Studies at Yale University and a tenured Associate Professor of History at the University of Florida.

Kovner’s first book, Occupying Power: Sex Workers and Servicemen in Postwar Japan, was a Choice Outstanding Academic Title, and won the best book prize of the Southeast Conference Association for Asian Studies. Her new book, Prisoners of the Empire: POWs and Their Captors in the Pacific, will be published by Harvard University Press in 2020. Her work has been published in the Journal of Asian Studies, the Journal of Women’s History, and Diplomatic History. Her work has also been translated into Japanese and Chinese.

Kovner received her A.B. from Princeton University and her Ph.D. from Columbia, and also studied at Kyoto University and the University of Tokyo. She is an active member of the Association of Asian Studies, the American Historical Association, and the Society for Historians of Foreign Relations.

Sarah Kovner, “Imperial Japan and Defeat in the Second World War: The Collapse of an Empire,” Journal of Asian Studies 80, no. 3 (August 2021).

Sarah Kovner, “Selling Sex under Occupation: The American-Japanese Encounter after 1945,” Journal of Asian Studies 68, no. 3 (August 2009).

Sarah Kovner, Review of Imperial Japan and Defeat in the Second World War: The Collapse of and Empire by Peter Wetzler, Journal of Asian Studies 80, no. 3 (August 2021).

Sarah Kovner, “Prisoners of the Empire,” interview with Al Murray and James Holland, We Have Ways of Making You Talk, 20 January 2021.

Sarah Kovner, “GIs in the Global History of Gender and Sexuality,” Book Forum on What Soldiers Do by Mary Louise Roberts, Journal of Women’s History 21, no. 3 (August 2014).

Sarah Kovner, Review of Troubled Apologies Among Japan, Korea, and the United States by Alexis Dudden, Journal of World History 21. no. 2 (June 2010).

Sarah Kovner in Between the Lines on ABC Australia Radio: Prisoners of the Empire: Inside Japanese POW Camps

Book Talk: Prisoners of the Empire: Inside Japanese POW Camps